iFish were fish avatars that displayed as your virtual avatar in certain areas of SBC created by tvguy347. You can dress them up using clothes from the iFish Store, or custom hoodies in the generator. You can optionally choose to set them as your avatar in the generator. They appear as your avatars on the forum index, SpongeBob Jeopardy!, SpongeBob Wheel of Fortune and Dunces & Dragons. (they originally also appeared in SpongeCraft as your default skin) They were first introduced during Octerror Fest 2012. They were temporarily removed in early 2014 due to issues, but returned over a year later for Snowcember Ball 2014. They used to be display underneath your badges in posts, but as of Starfish 11, they now only show in Jeopardy, Dunces & Dragons, and Wheel of Fortune, as users felt they took up too much space in posts. As of October 4, 2015, they no longer show in SpongeCraft due to problems. As of January 11, 2018, they began to show on forum index under "Who's Online in Bikini Bottom". They used to show in SBC Music but as of August 2018, they no longer show there due to changing sites. From August 2020 to October 2022, following the site's server move, Who's Online was discontinued, and iFish designs were requested via thread.

On October 6th, 2022, it was announced the feature would be discontinued after Octerror Fest 2022. Users were allowed to create one last design for their fish to preserve as a memory. 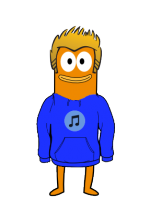 Example of a dressed iFish.

There are twenty-two different colors to choose from: Aqua, Blue, Green, Lime, Ocean, Orange, Pink, Purple, Red, Sky, Yellow, White, Black, Brown, Dark Red, Gray, Lavender, Maroon, Old Blue, Pale, Squid, and Starfish. Green is a default color given to everyone in the generator, but the other twenty-one can be bought at the iFish Store for 30 Doubloons. Clem was an alternative iFish color that could be purchased from 2016 to 2020, giving a lighter green and the only iFish color to have one eye and buck teeth. It costed 400 Doubloons rather than the other colors. Another exclusive iFish color, similar to Clem, was Plankton, which was only available during April Fools 2016 and August 2019 for Plankton's month. During April Fools 2019, an exclusive Thanos color was released. During July 2019 for SpongeBob month, two exclusive colors were added: Doodle and Sponge. For SBC's Christmas present, 10 brand new colors were added (listed above after White). The Candy Cane color was another limited edition exclusive color available until the end of the year.