Banner used on the top of the Arcade during v8 Orca.

The Arcade was an SBC feature that has existed in many different forms. It allowed people to play flash games and get high scores in said games. It had a mixture of both SpongeBob and non-SpongeBob related games. It was announced on September 16th, 2015, that it would close by the end of the month due to flash slowly dying and because the Arcade was not compatible with Invision Power Suite 4. It was removed with Starfish 11's launch on September 25, 2015.

On April 20th, 2019, JCM added a SpongeBob flash game archive, which could be considered a way of unofficially having the arcade again. It has since been used for a few tournaments in the same way the arcade was. 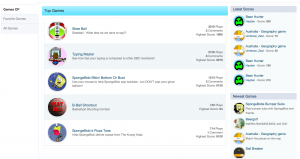 The Arcade before its removal.

The first known Arcade version was released June 24th, 2011 for V6 Shark. Unlike the future versions, it was just in a forum that had the games as topics. The games were embedded into the first post. Later into the year when SBC moved to vBulletin, aka V7 Clownfish, the Arcade was re-introduced as a full-fledged arcade system on October 26th, 2011.

After the SBC Shut Down Spring 2012, the arcade was on phpBB3 temporarily, but with few games. Later, after SBC upgraded to Invision Power Board with Orca 8, the Arcade returned again using the iArcade application on July 14th, 2012.

The arcade gained a few new games in February 2013. For the first time ever, the Arcade was used for a forum event this year, which in this case was for March Madness 2013. Four games were held every Thursday for teams to compete in.

The arcade gained a few new games in time for March Madness 2014, which were held every Wednesday. (minus the last one, which was on Thursday due to schedule issues)

The arcade was used again for March Madness 2015, which was the final time it was used for a March Madness event. On September 16th, 2015, it was announced the Arcade would not make the Invision Power Suite 4 upgrade, due to forum arcades becoming less desired, and thus, no arcade application was made available on IPS 4. Due to this, the staff decided to have a goodbye by having two tournaments on September 18th and 19th. It was removed September 25, 2015.