Quizzes were a brief SBC feature added on May 19th, 2019 for Sponge 13. They allowed users to make their own quizzes for any subject. There are currently eight categories to make quizzes in: Television, Music, Video Games, Movies, SpongeBob, History & Geography, SBC and Misc. Quiz makers could reward doubloons to people who successfully completed the quiz if they so choose. The feature became an immediate hit upon release with members. This feature was seen as a pseudo replacement for SpongeBob Jeopardy! for a bit, although it was not intended as such during production of V13. They were used to do the Spin-Off/Lit Trivia Contest at Spin-Off Festival 9 for the first time, marking a new transition in how SBC does its trivia games for events. They were continued to be used as SBC's new trivia replacement until early 2021. They were discontinued with the release of Jellyfish 14, being replaced by SBC Kahoot. 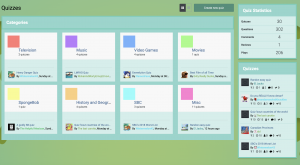 The Quizzes home page on SBC.
Retrieved from "https://www.thesbcommunity.com/wiki/index.php?title=Quizzes&oldid=7739"
Category: