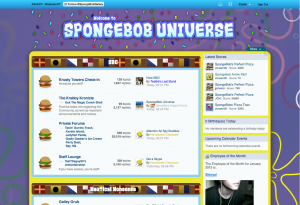 Orca 8 is the 8th version of SBC design, being the upgrade to IP.Board 3. It was also concurrent with Oceans 9. It was first announced on April 26th, 2012 by tvguy347. It was released on June 15th, 2012, and like vBulletin, many features were added as time went on. It featured a massive launch party leading up to the release on the Xat Chat. The release became the most successful in history and revived the Community after the disastrous second half of 2011 and early part of 2012. Activity rebounded considerably after the release of Orca and the release is responsible for setting the course of SBC in years after. Orca continued to be updated even as succeeding skins were launched, proving its continued popularity. It was one of the skins recreated when SBC updated to ipBoard 4.0. Tiki replaced Orca on January 1st, 2014, but the skin still remained in the selector. Orca was exclusive to Loyal Customers from September 25th, 2015 to January 15th, 2017. It was later removed due to lack of usage and age. However, it made a return for SBC's 10th Anniversary as a main skin, and was kept for Loyal Customers until April 3rd, 2021 for Jellyfish 14, where it was permanently retired for good.

On June 8, 2012, it was announced that (like in v7) there would be a change to the way we refer to versions. The V# was dropped, so that it would be referred to only as Orca.

The concept of Orca has been largely developed by tvguy, with infrastructure and custom features being scripted by hilaryfan80. tvguy has also said that Orca is not only design changes, but also includes the Orca Initiative, which includes such new sites as SpongeBob Universe, which is a creation founded by tvguy and AMK from the SpongeBob Wiki.