V6 Shark is the 6th version of SBC design. It was launched June 24th, 2011, and retired on August 29th, 2011 with the launch of v7 Clownfish. The update was a minor one in comparison with v5 Dolphin, with the forum icons, banner, and the "Who is Online?" image changing. The first ever SBC Arcade was added as well, starting off with the launch of 6 games. It was originally found on the navbar, and as a sub-forum in Off-Topic Games. A Thanks Button was also added, where a user could give 25 doubloons to a replier in a thread that they made. This was seen as an early version of Reputation. V6 Shark was originally going to be released on the cz.cc site, but it got pushed back due to SBC moving back to forumotion.

Only 2 new rules were added: 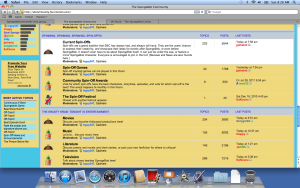