This page is about the version. You may be looking for the skin, titled V14 Jellyfish. 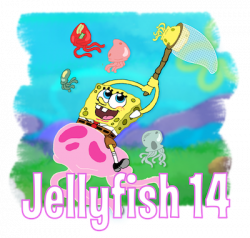 A promotional image by LocalAquatic for the version.

Jellyfish 14 is the 14th version of SBC, released as an Easter present on April 3, 2021. The site upgraded to Invision Power Suite 4.5. LocalAquatic was the lead designer of this version.

Leading up to the release of this version, there were several bits of foreshadowing to it: