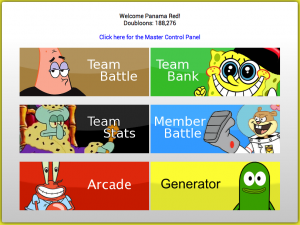 Teams, originally under "Glove World", was a feature of The SpongeBob Community released on June 29th, 2012 as part of Orca. The final teams were Krusty Krew and Chum Buddies. There have been four generations of teams. You could be drafted into a team in this topic. If you did not want to be a team, you were known as "Solo", an unofficial "third team."

Teams could face against each other in various forum events and games. SpongeBob Pictionary, SpongeBob Jeopardy!, SpongeBob Wheel of Fortune, Dunces & Dragons, SpongeCraft, Among Us, Kahoot, Cards Against Humanity and Jackbox were examples of games used in said events.

In March 2022, it was announced teams would be ending in July 2022 with Teams Mania, which was the final teams event on SBC. Teams were disbanded permanently after the event concluded on July 31st, 2022.

A long planned feature previously on SpongeBuddy Mania in a different form, Teams was first announced by tvguy347 on December 30, 2011 when SBC was still on vBulletin. The Good Noodles, originally a VIP usergroup that SBCers could purchase access to with doubloons, was converted into a team and the Krusty Krusher were introduced as a second team. The original concept of Teams, as proposed by tvguy, was a site-wide RPG that saw users battling for control of the forums themselves with member-on-member battles. The teams were provided with two private subforums where each team could "plot against the other." However, being that lack of staff involvement was a cornerstone of the concept, the first release of Teams left most users confused on its purpose. This, coupled with the pay-to-play (with doubloons) nature of both teams, led to the failure of Teams 1. A staple of the original Teams was the Team Bank, where a team raised its own funds in order to keep their subforum. While neither the Good Noodles nor the Krusty Krushers defaulted while they existed, the involvement of doubloons in Teams was an unnecessary complication in a forum feature designed to increase activity.

The absence of a notification system for the member battles and team stats being left incomplete by programmer MDPP also crippled the system.

A second version of Teams called Teams 2 was released on August 19th, 2012 including the following features:

On December 15th, 2012, the first Teams reform occurred as "Teams 2.5." Good Noodles and Krusty Krushers were dissolved and four new teams were created: Karate Choppers, Goofy Goobers, Jellyfish Hunters, and Spy Buddies. The core features of Teams 1 and 2, but several items were axed (Team Leaders, Team Leader Stores, Swords, etc.). The four new teams called for a re-drafting of team members, which was handled through the Magic Conch Shell. While a member used to join a team via purchasing access on the SBC Store, the Magic Conch Shell sorted members into one of the four teams based off questions the member answered. The four teams competed on Roblox, but users were spread out, resulting in lopsided victories wherein more active members were concentrated on certain teams and other teams saw very little participation.

After many failures in the January Racing Tournament, Teams stopped using Roblox and all tournaments were delayed until further notice. Other avenues for Team competition were used in this period, such as SpongeBob Jeopardy. The first March Madness was held in this interim.

The four-team format was axed in 2014, replaced with the Enchanted Tikis and Hawaiian Tikis for March Madness 2014. They were the shortest-lived teams, lasting from March to July 2014 and participating in just one forum event.

On July 1, 2014, Aquatic Nuggets announced the release of Teams 3. Updates include:

Jjs and CNF were to select the members of the Band Geeks and Drasticals respectively as the first team leaders. Their picks were announced on July 4, 2014. However, nothing happened with Teams following the July draft and fell into disuse until January 23, 2015, when jjs announced a re-draft and the reorientation of Teams as a forums-event feature. SpongeCraft was also announced for the first time as a replacement for Roblox. Jjs and Aquatic Nuggets oversaw the transition of Teams from an RPG to a means of having continuity between forum events.

Since then, Teams became a cornerstone feature of SBC and the fourth generation of teams (the Drasticals and Band Geeks) continued without interruption since 2014. A third group, the Independents, debuted in 2016 as an alternative for members not wanting to join either team. Jeopardy, Wheel of Fortune, Dunces & Dragons and SpongeCraft were commonly used during teams events for this era. It was announced after Snowcember Ball 2019 that the current teams would be discontinued after a long streak, and would be replaced with new teams coming in 2020 for Teams 4.

Teams 4 launched on February 28th, 2020, introducing the Krusty Krew and Chum Buddies as the fifth and final generation of teams. New SBC games introduced during this era included Kahoot, Among Us and Jackbox. As of September 25, 2021, users now gain experience points for winning games as part of the new badge system. It was announced after March Madness 2022 that teams would be coming to an end, with Teams Mania acting as the final event. The Chum Buddies won the final event.

Below is a list of events in SBC history that have involved teams:

Below are features that used to exist for Teams in its earliest days.