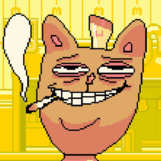 Artists/Bands You Don't Support For Reasons Besides The Music