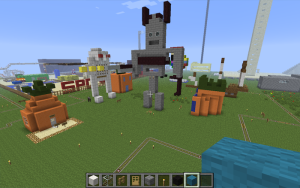 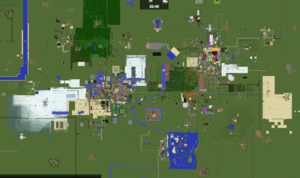 The main region of Spongecraftia.

To the north of this region contained Ukulele Bottom, Atlantean SC, Andean SC, Montagne, Moon City, Diamond Town, and Raspberry City (the capital of the Spongecraftia server). Even farther north than this was Futuristic SC, Outlandia, Goldinia, and the original Kelp City. Farther north than this, at the very ends of the server, you would have found disparately built countries like Hispanic SC, Penumbria, 80s Spongecraftia, Vegas SC, and the second Directory. The northernmost build on the server was the isolated Survival SC, where members could have played in survival mode. On the far northeastern side of Spongecraftia was Sabanna, a mountainous country.

To the south of the main Spongecraftia region lied a second heavily built metropolis. The Squidville-Salty Seas corridor included Cape Coral, Spongy Harbor, Barnacle Bay, Shell City, Hunterville, Lumillard, and Squidville, one of the largest cities on the server. To the far east of this was Black Rock, Tech City, and Arctic SC. Farther south was much more rural and included the Wolf Kingdom, Rock Bottom, Willow Territory, Throwback SC, Horizonia, Martian SC, Nuclear SC, and Japanese SC, which was one of the southernmost countries/cities in SC, as well as one of the oldest.

Many users "owned" respective countries and cities. Spongecraftia was a shared creative server, but these users held primary responsibilities for these cities. Large centers like HSC City, Squidville, International Village, and the Salty Seas featured builds from a wide variety of users. Some users, however, had what were called "reserves" which is where they had exclusive rights to build and control sectioned off pieces of land. Notable reserves included the crushingmayhem reserve, ZCD Reserve, and SBL Reserve. Some cities did not exist solely in one country (such as International Village, which sat on the intersection of three borders), and others were not in a country (Raspberry City is a city-state as the capital, for example).

Generally a safe server, the only time Spongecraftia was griefed by a non-SBC user was in the 2015 Griefing Attacks. Before you had to sign into the server with an SBC account to get access, two griefers destroyed parts of HSC City (then just Historic Spongecraftia). It was the most devastating attack the server has experienced, and massive changes occurred thereafter, both with the design of the world and how SpongeCraft as a platform operated. A sign-in was thereafter required, and the server was expanded to allow for greater expansion.

Spongecraftia had seen several server capitals designated since 2015. Historic Spongecraftia, the first country and birthplace of the server, was the default capital as the server's spawn site and largest development. This capital designation was later refined to just HSC City when the country of Historic Spongecraftia grew beyond the original city. When the original Directory located in HSC City faced growth constraints as an increasingly large number of countries/cities were built and HSC City became too packed to expand the Directory, a new Directory was constructed in northwestern Spongecraftia; the spawn site for the server was also moved there (the spawn site for HSC City continued to be the original spawn site for the entire server). This directory lasted for quite some time and was named the Grand Spongecraftia Station with an increased amount of space. A small community formed around this directory; several events were also held there.

A third Directory was created in August 2017 to alleviate further growing pains. A new location was chosen for the new Directory, far less remote than Grand Spongecraftia Station. This third Directory was named the Grand Spongecraftia Directory and is far more ornate than either of its predecessors. However, at this junction, an actual capital city of the server was built northwest of HSC City and was called Raspberry City. The server's spawn site and capital stayed separate for the rest of the server's life.

Spongecraftia was divided into countries. They varied in size and theme and were spread out across the world. Some countries had one city, whereas others (like Historic Spongecraftia) featured multiple cities and towns.

There was an ongoing controversy about how you were supposed to type Spongecraftia. The original basis of the name was Minecraftia, the unofficial word to describe the planet Minecraft takes place on. Due to SpongeCraft having a capital C for the word craft in its name, users assumed that the spelling of Spongecraftia was a mistake, and that it was meant to be spelled as "SpongeCraftia". According to sbl, this is not the way to spell it, as Minecraftia is spelled without a capital C because the official spelling of the Minecraft game is...Minecraft. This caused inconsistency on the server, with some signs showing the spelling with a capital C and a lowercase C.