The Spin-Off Awards were an event and award show held to celebrate spin-offs. They were originally named The Spinnys, the original version from TV.com. Bob_Ball was the creator and host for the first 4 Spinnys. There is a special award called the Hall of Fame where creators and spin-offs get picked and put into Jjsthekid's signature. (originally Bob_Ball's) 70s continued the tradition on The SpongeBob Community with the Community Spin-Off Awards, which had 8 editions held. 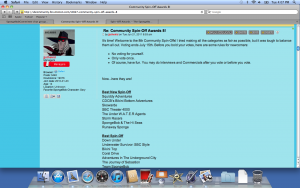 A picture of the 8th Spin-Off Awards.

They were continued into the Golden Community Awards.

After the 6th edition, there were no more Spinnys on tv.com due to it dying. Instead, they were continued into the Spin-Off Awards on SBC, with the actual award being called a Spinny and the ceremony being called the Community Spin Off Awards.

A joke award ceremony, only one edition was ever held.