SpongeBuddy Mania is a merged fansite and forum formed on January 17, 2005, created by the union of SpongeBob Mania (founded by ssj4gogita4 on June 6, 2003) and SpongeBuddy (founded by Spongey34 and Spongedude on April 3, 2004). It remains an active player in the SpongeBob fandom.

SpongeBob Mania and SpongeBuddy were created independently of each other on June 6, 2003 and April 3, 2004 respectively. ssj4gogita4 and Spongey34 were both co-administrators on SpongeBuddy, alongside spongedude. Over the course of a year, both sites grew and flourished, offering forums and a site full of content. 10,000 posts on SpongeBuddy were reached by August 5, 2004, with a fan fiction archive being added shortly added. Moderator elections were held in December as the site continued to expand. A week after the mod elections, a power surge knocked the site offline, all of the data lost, with the most recent backup from October. 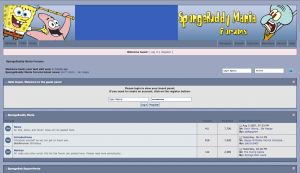 400,000 posts are reached by 2009. An overhaul of both of the site and the forums is launched at Christmas 2010. However, the forums nosedive in 2011 (this era is later referred to by newer members as The Void, sharing the same name as the period years prior in which SpongeBuddy lost its content during the power outage). The number of people on the forums rapidly dwindles. 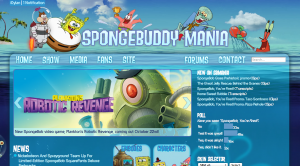 In August 2017, a huge staff changed occurred where three moderators stepped down (Cha, PhilipB, and SBRoxMan) and three new moderators were chosen to take their place (Trophy, PinkPearl, and Amphitrite).