The SBC Civil War (also known as the Second SBC Renaissance) began on November 27th, 2011 following tvguy removing 70s from his position as an administrator. An intense conflict between 70s, tvguy, and the general community followed. The struggle damaged the site's activity, resulting in a drop from 30 active users to roughly 10. This was the biggest power revolution since the terminoob breakaway, and greatly influenced the Community's overall state in the months following the struggle. It resulted in the removal of the Main Admin position, which had been in play since the site's conception in 2009. 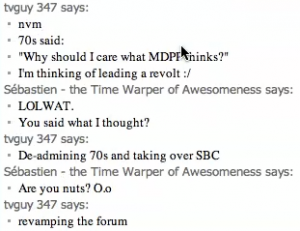 On November 20th, 2011, 70s, the Main Admin at the time, announced he would be taking a sabbatical. While not directly stated, it was implied that it was the result of a recent argument with teenj12 in the Spambox. It was also speculated his announcement was fueled by several prior arguments with members, primarily staff, as well as 70s's declining interest in SBC. The Spambox incident in particular had put a cloud over 70s's image, with fellow staff members openly criticizing his (as moderator Wumbo put it) "boorish" behavior on the forums.

Three days later, on November 23rd, 2011, 70s posted his thoughts on departing from the forums permanently. Reactions to this were of aggravation, and on this date, tvguy347 demoted 70s from his administrative position for not having done any actual work on the forums in months, sulking around and providing only critical input in staff discussions that often sparked heated arguments with other staff, and whining inappropriately at members of the community.

On November 24th, 2011, following his termination as an administrator, 70s made a short post that simply stated if he was not wanted, he wouldn't remain on the forums. However, within the next few days, increasingly aggressive posts from 70s sparked the war. Members began to rally on 70s's account, explaining he shouldn't have been de-admined without the staff's consent. Many agreed, as tvguy had acted alone. The situation worsened and fights began to occur all over the forum, not exclusively between 70s and tvguy, but also between several other members with partisan views. A topic in the Staff Lounge increased external pressure on tvguy to admit 70s back into the staff.

Activity took a large dip as tvguy stood firm and refused to reinstate 70s as an admin. In retaliation, 70s announced his new reign as Main Admin the next day, claiming everybody would "love it". tvguy was simultaneously receiving several private messages from various members and staff in support of 70s, instructing tvguy to re-induct 70s. With this internal conflict, the realization that it could potentially kill the Community came into view and the staff itself increasingly pressured tvguy to re-admin 70s.

A thread was created on December 1, 2011, expressing user's waning tolerance for the recent outbreak of fighting on the Community. During this time, it was rumored that 70s had listed members that he liked/disliked on the Community. Several members expressed disinterest in the fact that 70s had even categorized users this way, instead criticizing the fact that he chose to share it with anybody. 70s responded, saying that the list was something he'd told ExKizuna one night where he was in "an awful mood." He also made it clear he was apologetic.

That same day, Steel Sponge and CDCB were both terminated from the staff by tvguy, leading to public outcry and anger geared towards tvguy. It was announced in response to the retaliation by users on behalf of Steel and CDCB that both staff members had been informed of the decision months prior, and that it was a mutual decision between tvguy and 70s.

On the night of December 2nd, 2011, tvguy staged a rally, where he gained the support of fifteen prominent Community members for his notion of abolishing the Main Administrator position. tvguy then announced that the position would cease to exist, and 70s was reinstated as an administrator on December 3rd, 2011, although not as the Main Admin (as tvguy made clear to him).

On December 4th, 2011, a debate began, where the member JCM believed the staff should reveal more about why 70s was re-admined; despite half of the Community believing 70s should be an admin, the other half still wanted him off the staff. After several long pages of discussion, the thread was locked and trashed by tvguy. The struggle effectively ended on December 4th, 2011, becoming the longest ongoing conflict in the history of the Community for its time (spanning 12 consecutive days).

In the end, tvguy led the way to rid the site of the Main Admin position, which allowed for staff prosperity in the future. The conflicts had an impact on the Community's Christmas festivities, as well as an overall impact on its activity, severely damaging it in the long run. 70s did not remain an administrator for long after the conflict. He resigned as an administrator on February 16, 2012, a mere two months after fighting to retain the position. Shortly after the power struggle, SBC experienced server troubles and was forced onto the free software phpbb3, effectively killing the site and reverting it back to the activity it had experienced at its inception in 2009. tvguy347 later returned in April 2012 and led the site in a new direction; instead of one person online at one time, the site bounded into unprecedented areas of activity. The first hierarchical restructuring of the staff was designed by tvguy. The Director in Chief position succeeded the Main Admin position after several months of the site not having a true leader. Unlike the M.A. position, the Director in Chief is much more balanced in power by the rest of the staff.