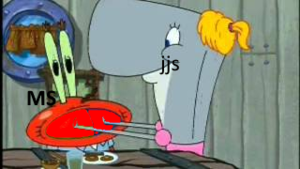 An image satirizing the events, created by Halibut, original concept by Trophy.

Metalgate was a major extended incident on SBC in late May and early June 2018, centered around a libelous fourteen-page Google Doc created by then-moderator Metal Snake.

The document was created with the intention to portray lead admin jjsthekid as corrupt, based on allegations that he gave Hayden special treatment in regards to punishments. Other users that were singled out within the document included Homie, Wumbo, Clappy, and HawkbitAlpha. This was followed by a series of additional documents, in which Metal doubled down on his previous statements, while presenting new accusations and falsehoods.

The incident was coined "Metalgate" by HawkbitAlpha on June 10th, 2018.

The Google Doc went into detail about jjs' supposed unfair and authoritarian practices. Metal accused jjs of not handing out proper punishments and showing outright bias toward and against certain members. Most of these claims were later found to be either outright lies or half-truths. The document was incomplete at the time it was discovered, originally planning to include testimonies from more people.

Spread of the document

The existence of the document was accidentally revealed when Spongetron sent it to President Squidward through a Discord PM, who showed it to Trophy. Trophy then leaked the document to jjs. When word spread that it had been leaked, Metal Snake deleted the original copy from Google Docs, though jjs archived the document, and released it into a group private message alongside his own comments. The members of this group, for roughly three days, discussed how to appropriately respond to the situation.

As it contains sensitive information involving two of the attacked people in the document, the group involved in the private message decided to instead release an abridged version of the document, which can be viewed here.

On May 24, 2018, Metal left the site indefinitely after he realized the document became public. He was later demoted down to Loyal Customers on June 4, along with Cream. Spongetron received a 5 day ban.

On June 10, 2018, a five-page addendum, also written by Metal, was revealed to be added to the document. Here, he doubled down on his criticisms of jjs (and Hayden) by attempting to rebut his statements and claiming he was trying to manipulate Cream by offering her a position as Fry Cook.

On June 15th, he added another rebuttal, partially directed at this very wiki page, that only harped on previous points and featured PM's with Renegade that acted as "proof" of jjs' side having their minds set. Metal was later banned the same day, after failure to negotiate with PatBack.<ref>https://pastebin.com/u0HpBqFe</ref>

Presently, the group involved in Metalgate has moved to other sites. Metal and Spongetron, in particular, have fled to the My Little Pony Forums, and continue to bash the site on certain occasions.

When the incident became public, response to Metal Snake's conduct was overwhelmingly negative. His relationship with Cream and Spongetron was derided by several members as a more damaging version of the Fantastic Five. HawkbitAlpha pejoratively compared the creation of the document to his own instances of recording the Xat in 2011 and 2012, and later wrote a scathing letter directed at Metal on the matter. hilaryfan80 noted how Metal Snake's document was not the first document he has made in spite of SBC, with the first one being Modern SBC User being, ironically, about the Fantastic Five.

The document has been unfavorably compared with the "Not So Awesome" document regarding the media company Channel Awesome, due to its attempt to uncover "misconduct" behind the scenes of SBC, as well as it being published on Google Docs. Some users have also viewed this document as an attempt at doxxing, as Metal planned to release the document publicly, while it contained private personal information regarding hilaryfan80 and Homie, along with including people's IP addresses in his images.

Most notably, one of the side effects of Metalgate was a subtle increase in focus on the relationship between MDPP and Homie. The original document mentioned that Hayden had attempted to leak the details of the breakup between the two. Just over a week after the ending of Metalgate, on June 25th, Homie began to privately share her own document elaborating on her relationship with MDPP. Tensions between the two finally boiled over on June 29th, initiating the Third SBC Renaissance.

On August 1st, 2018, a skin named SBCNN was released. This is a reference to Metal's response to this wiki page, in which he referred to the site as "SBC(NN)".