2010 was the year where SBC started to spark in activity, and grow to the forum it is today.

After a lot of silent activity in late 2009, SBC began to open its doors to the public. Fed up with TV.com, many users started to flock to it in mid January 2010.

In February, new events begin to happen as 70s believes that things are active enough to start improvements that will benefit the small community. Around this time V4 Octopus was released. The first Spin Off Awards and User Awards are respectively held in February. Along with this, the site is given a skin for Valentine's Day. As the SpongeBob TV.com boards begin to crash and burn, old users filter onto SBC and the site begins to finally grow from its original user body of around 15. terminoob and 70s begin to formulate ideas about possible events and what to do with the expanding user body. Also in the beginning of this month was the infamous xat incident with hipeoples4, which can still be found as a YouTube video.

Wanting more, in March, users team up and begin to recruit new users onto the site. This brings us users such as Girlygirl24, although the other users recruited end up leaving. However, it does spike up the official community members number to a total of 40 registered members. The chatbox on the main abnormally spikes, and becomes very popular. Because of this popularity (which effectively lasted from March until mid-July) it temporarily caused the Xat to die. Updates are continuously done, thanks to terminoob and 70s.

In April of 2010, Spongebobs1fan is the first user to reach the milestone of 1,000 posts. At this time, the site only has 3,000 posts, which means 1/3 of the posts on the site are Sbs1fan's. This is the only time this has ever happened on SBC. Meanwhile, jjsthekid hosts the 2nd CSA's (Community Spin Off Awards). Simultaneously, 70s adds Spongebob smilies to the somewhat small library of emoticons. At this time, we redecorate for Easter and reach 62 users. We find that more people are joining more frequently. As SBC continues to develop and grow, the rules are modified by 70s and tvguy. 70s surpasses Spongebobs1fan as the number 1 poster (which he keeps off and on presently). All in all, 15 new users have joined in April, a huge step up over previous months.

The first Spin Off Festival is planned, an idea thought up by tvguy. It is somewhat of a success in May. Around this time, things increasingly heat up between 70s and terminoob revolving around power. Despite terminoob giving 70s full authority back in November, he's back now with more times and is angry. He disapproves of everything 70s does, and gets very irritated when 70s does things on his own. 70s accepts terminoob as a fellow admin, but not as his superior. Signs of their strained relationship show, as they are constantly fighting in topics. This is largely displayed in a possibly site-changing debate about how not only should Spin Offs be about SPONGEBOB, but how the site as a whole has drifted away from Spongebob.

After arguments across the boards, there is a compromise; the boards are rearranged so that Spongebob Boards are at the top, as well as the regulations regarding what qualifies as a spin off become less lenient. Just afterwards, we reach 14,000 posts, showing the Community has immensely grown since April's 3,000. Spongebobs1fan is also announced to be the next User Award's host. He crafts a revolutionary banner; previously, SBCers had been without graphics. This was entirely new to them. This ushers in a new era to the site: graphic design. 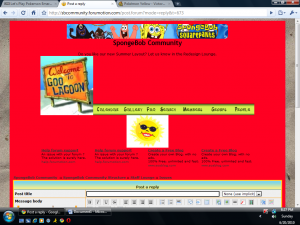 On June 21, 2010 shocking news stuns the board. SBC Founder, terminoob, has resigned. The news sweeps the board; people are shocked. terminoob explains that tvguy being temporarily made an admin to install something was the last straw; he hates being ignored, and got into a huge fight with 70s on the SBC Chatbox the same day. He also says he leaving, and left for a few months. This caused a huge change in the site - jjsthekid and tvguy347 were promoted to admins, while Sbs1fan, dragiiin123, and SG12 are made mods. Many more changes came along the way, and some such as suitelife return. SBC was also reviewed by forumotion, but scored an F for its first review.

In July, many members such as SpongeSebastian, Spongebobs1fan, and Tvfan95 were banned from TV.com due to a ban raid led by WhaleBlubber. WhaleBlubber's attack on TV.com basically led to the death of the site, as if it had not been dead enough already. Many then kept moving to SBC as a result, while the staff stopped WhaleBlubber from attacking SBC. Also in July, Stop What You Are Doing's were formed, becoming a popular SBC tradition. Many All-Nighters were held throughout the summer.

In August, the staff was constantly changing, and then the site became fast rivals with another forum called BlueFoxes, as SBC tried to befriend them, but the members treated the SBCers like dirt, thus sparking off a fued. Thanks to jjsthekid, tvguy347, 70s, dragiiin123, and spongebobs1fan though, the forum was shut down after Mack (their leader) made 70s an admin. They screwed it up so badly that Mack ended up deleting BlueFoxes, and they never messed with SBC again. In August 2010 the xat would then hold the short-lived Xat Games. SBC was then later reviewed again, this time scoring a C, a step up from the last review. Throughout late August and September, SBC held a 2nd Spin-Off Festival, which was more successful than the first one. The site however suffered a huge spam attack from famous TV.com troll Captain52 on September 25th, 2010.

October brought some tensions when terminoob returned on October 8th, 2010. The site got a Halloween design through the month of October.

In November, tensions exploded across the community through various fights between users, remaining TV.com users versus SBC, and storytime7 calling the staff out. To top it all off, SBC entered a war with SBM, resulting in a spam attack on November by several SBMers. The wars continued out in December (see this for more). This two month period is seen as one of SBC's most drama fueled times. The site got a Christmas design on December 17th, 2010, with a Spin-Off Festival 3 following a few days later. 2010 went out with a bang when V5 Dolphin launched on December 29th, 2010, which was a huge step up for SBC, with a beautiful new design, incorpating new things such as a store forum to use Doubloons (Glove World). terminoob left again however due to a conflict in the Staff Lounge the same day.

For the most part, SBC had a shining year, reaching over 200 members by the end of the year.