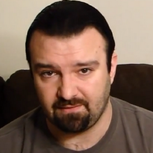 The SpongeBob SquarePants Movie 3: Sponge on the Run Discussion

By Darksydephred, April 30, 2015 in SpongeBob Discussion