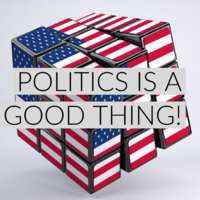 SBC's own club for discussing anything and everything regarding politics, on any level. We invite anyone interested in the subject to join!